Charity Work Associated with the Wheelwrights

The Worshipful Company of Wheelwrights set up the Wheelwrights’ Charity in 1983. The appointment of trustees, who are all members of the Company, is governed by the Trust Deed.

The Trustees meet four times a year to agree the broad strategy and areas of activity for the Charity, including consideration of fund raising, grant making, investment and risk management.

The main charitable objectives of the Charity are to support

In recent years, donations and grants have been focused through four main areas. The General Fund, the BattleBack Fund, the 2020 Fund and most recently a specific Craft Fund.

In these sections you can find out considerably more about where grants have been made and the impact this has on those who receive them.

To mark the 350th anniversary of the granting  of a Royal Charter to the Worshipful Company of Wheelwrights an fund raising appeal was launched in 2013 to raise funds over the seven year leading up to 2020 to be allocated to a dedicated 2020 Fund that would make grants predominately focused on the provision of equipment and taring for disabled people participating in sport and elite sports activities, including achieving Paralympic status.

To date (31 December 2020) the 2020 Fund has raised over £165,000 which would not have been possible without the generous support of liverymen and in particular the tyre industry.

The donations from the tyre industry have arisen through the establishment in 2016 of a formal link with the National Tyre Distributors Association which pledged to promote the Wheelwrights’ 2020 Fund as its preferred charity for a period of five years.

Grants have been made:

A special commitment over 5 years of £50,000 towards installation of a wheelchair racing track.

The Charity has been the principal sponsors of the annual Inter Spinal Unit Games held at the Stoke Mandeville Stadium by WheelPower, a national charity for wheelchair sport which provides opportunities to introduce people to wheelchair sport.

Grants for equipment are made each year to individuals identified by WheelPower and considered jointly with the Wheelwrights’ Charity trustees.

In 2020 a Charity Fund-raising sub-committee was formed.  This sub-committee, reporting to the GP&F committee, is chaired by Court Assistant Sally Bridgeland and aims to get greater engagement from the Livery in fundraising.

When a member of the Armed Forces had been seriously injured on the battlefield, he/she was airlifted to a hospital in Warwickshire. After they had completed their hospital treatment, and which did involve in some cases the loss of three limbs they were moved to Headley Court the only Rehabilitation Centre then available.

Then the real mental as well as physical challenge began. How do you demonstrate to a badly maimed young man or woman that there still is a purpose in life. Engaging them in sport was the initial step and some showed remarkable aptitude. Unfortunately, having reached a certain standard there was no assistance to take them on to the next stage and the ultimate goal of International standard and the Paralympics.

In 2009 the next four Masters of the Company took up that challenge and set up within our own Charitable Fund a quite separate fund under the Battle Back label. The Wheelwrights Fund would provide grants to disabled members of the Armed Forces to assist with training costs and purchase of specialised equipment. Our target was £150,000 and we were progressing steadily but very slowly until Harrow School adopted the Charity in 2011 and we achieved our target with the raising over £80,000 through pupils participating in their annual Long Ducker run from Marble Arch to the School.

Over the lifetime of the Fund, the Charity has made grants totalling almost £175,000 enabling 170 disabled veterans to participate in disabled sport and several cases train and participate in Paralympic sport.

£36,927 during 2010, 2011, 2012 and 2015 to provide clothing and equipment to individuals participating in archery, athletics, canoeing, hand biking, fencing, karting, pistol shooting, track cycling, triathlon, wheelchair basketball and wheelchair racing. This enabled a number of individuals to represent GB in number of events including 2011 Paralympic Word Cup, 2012 European Championships, 2012 Paralympics with one participant lighting the Paralympic cauldron and another winning thee silver medals and the 2016 Paralympics where two RAF veterans each won a gold medal in the cycling team Sprint and club event respectively and two Army veterans each won a bronze medal in the canoe sprint and on the athletics track respectively.

£20,000 to the Paralympic Sledge Hockey programme phases I and II.

£36,000 to allow 9 athletes to participate in Paralympic Talent Transition Training of whom 6 went on to compete at the London 2012 Paralympics.

£14,418 to allow 9 individuals to attend the Help 4 Heroes Paralympic Inspiration Programme during the London 2012 Paralympics.

£9,043 to allow 8 athletes to participate in the Talent Transition Programme held during the 2014 Winter Paralympics for potential Sochi and Rio competitors including alpine skiing, archery, bobsleigh, rowing and wheelchair basketball.

£7,000 to fund 12 multi-sport wheelchairs for Phoenix House Recovery Centre at the Army base in Catterick, North Yorkshire.

Finally, £18,950 to enable eight injured veterans to take part in the Sydney to Hobart Yacht Race in 2017 and for a further six to participate in the Paralympic Inspiration Programme at the winter Olympics in South Korea in 2018.

In 2018, a separate Craft Fund was created through which the Charity will channel its ongoing support for the Wheelwrights’ craft.

The main source of funding comes from donations made by the Company’s 100 Club, but liverymen are also able to make donations directly to this fund rather than the General Fund if they wish to.

In 2018, and in recognising our increasing involvement in training of wheelwrights of the future, the Company set up a 100+ Club on the basis of 50% of subscriptions going to a newly created Craft Fund within the Charity and the other 50% going in prizes.

To date over £8,000 has been passed to the Craft Fund and has been used in part funding of our Apprentices one of whom Tom Carroll is pictured. It is fair to say that without such funding his Master, in this case Yeoman and Master Wheelwright Douglas Andrews, would not have been able to take on Tom. 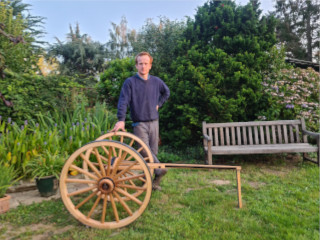 Riding For The Disabled

In 1995 the Company supported Riding for the Disabled through presentation of rosettes at an annual riding event, a tradition that continues to the present day.

The support initially provided by the Charity for the SE Region Carriage Driving Show was by way of meeting the cost of rosettes that the Master of the day would present at the event and over time that support has been increased so it now meets the full cost of the Show.  In 2020 the Charity agreed to fund 2 gazebos for the RDA, so that competitors would be protected from the blistering summer heat that the South East was experiencing

The 2019 event was at its new venue of Hadlow College, Tonbridge, Kent. The Master (James Tucker) attended to present the rosettes and trophies. The event provides access for disabled drivers of all ages in motivational competition, aiding participation by keeping the entry fee low and providing pleasure, increasing motivation and self-esteem for the participants. On the day the Master presented a cheque from the Wheelwrights’ Charity of £635 which provided up to 100 rosettes for the participants of the various classes and covered venue hire, judges and official expenses and refreshments. 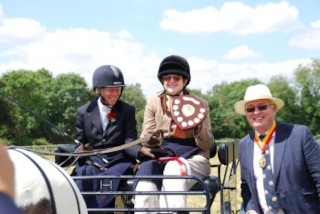 As a result of the Charity’s support for the RDA SE Region Carriage Driving Show for over 20 years the then Upper Warden, David Mortlock, was invited by the Region’s Chairman, Lindsay Correa, to attend a reception at Saddlers Hall in November 2019 to mark the 50th anniversary of the RDA. He is pictured here having a laugh with Princess Anne, President of the RDA, along with Lindsay Correa. 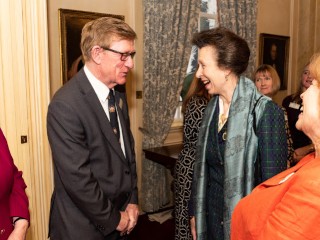