The Geoffrey Udall Prize for Paediatric Medicine is awarded annually by the Wheelwrights’ Charity for work by a student at Barts and the London School of Medicine and Dentistry, who has made both clinical and practical observation in a particular field associated with handicap. The Winner receives a framed Citation and a purse of £1,000.

Dr Geoffey Udall was Master of The Worshipful Company of Wheelwrights in 1970, the Company’s Tercentenary year.

He was a consultant paediatrician at St Bartholomew’s Hospital and had a reputation for being a warm man and an amazing doctor. For those working at Barts it was clear to see that he had an extraordinary ability and all the time in the world when it came to children.

On his death in 1994, he bequeathed his family’s estate and three acre walled garden at Beech Hill, near Reading, to the charity, Society for Horticultural Therapy and Rural Training (now called Thrive) of which he was founding Chairman. The Estate is the Charity’s national headquarters and flagship garden to this day.

Recent Winners Of The Prize 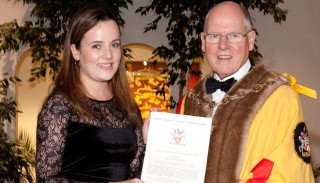 In her 5th year at Barts and The London and currently undertaking an intercalated MSc in Clinical Endocrinology before completing her final year next September. Paediatrics and Obstetrics & Gynaecology are her strong interests and she is president of these...

Next Entries »
We use cookies on our website to give you the most relevant experience by remembering your preferences and repeat visits. By clicking “Accept All”, you consent to the use of ALL the cookies. However, you may visit "Cookie Settings" to provide a controlled consent.
Cookie SettingsAccept All
Manage consent