How a Wheel is Made

The wheel began with the nave or hub, usually a well-seasoned piece of elm, described by George Sturt in his book The Wheelwright’s Shop as:

A lumpish cylinder in shape – eleven or twelve inches in diameter and twelve or thirteen inches from end to end – a newly turned stock was a lovely thing…. And now it lay, butter-coloured, smooth slightly fragrant, soon to begin years of field work, after much more skill – the skill of ancient England – had been bestowed on it, though already telling of that skill in every curve.

Naves were originally rough-hewn with an axe, but were later turned on a lathe. The wheelwright then marked out the places where the spokes were to be morticed into the nave, and bored the holes for them. The spokes of oak were then shaped by axe, saw and spoke shave to have the maximum of strength with the minimum of weight. They were driven into the nave with a sledgehammer, not straight, but at an angle to give the right amount of dish.

The felloes, of ash, elm, oak or beech, had been shaped to a pattern and were then bored to take the tongues of the spokes: two spokes to each felloe. They were also bored to take the dowel of the adjacent felloe. Once they were hammered into position the wheel had its rim. 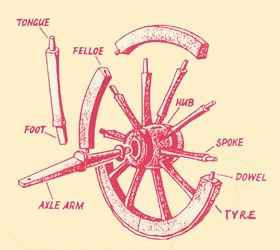 For shoeing, the wheel was then set up over a pit of water. The wheelwright took out the strip of iron, already curved by heat and punched with nail-holes, and laid it red hot on top of the wheel rim. As the hot iron burned into the wood, the wheelwright punched in big rose-headed nails, and then turned the wheel round into the pit of water. While the newly fastened strake was cooling, the operation was repeated on the opposite side of the wheel, until the six strakes completed the job of tyring. Shoeing a wheel in this manner continued until the latter part of the nineteenth century.

Hoop tyres were not introduced into Britain until the last quarter of the eighteenth century. Solid bars of iron bent into a full circle and welded, were put on hot and nailed into position on the wheel rim. As the tyre cooled and shrank, it pulled the spokes into exactly the right amount of dish. The nave bonds were also heated and driven into place on each side of the spokes.

Finally, the wheel had to be boxed. This meant that the centre of the nave had to be hollowed out and a cast iron box inserted and fixed with wedges. Into this box the axle arm was fitted. Under the first Bylaws of the Worshipful Company it was a punishable offence to sell wheels before they had been boxed and shod.

For most wheelwrights however, wheels were only part of their work. They often built the cart or wagon, complete with shafts and axle-beds; it would be their responsibility to see that the wheels were properly hung from the axle-arms. The iron axle-arms were given a slight downward and forward slope, so that in a dished wheel the lowest spoke, which was at that moment taking the full weight of the load, stood perpendicular.

Making a Wheel – The Book

In February 2013 “Making a wheel” the definitive guide to making a wheel or more strictly “how to make a traditional light English pattern wheel” was reprinted.

The co-authors, Robert Hurford and John Wright, are both Liverymen of the Worshipful Company and have added a new chapter covering boxing or fixing the axle box. Also included are photographs of two fine examples of wheels. One made by apprentices in1993 and the other, in 1995, by the then Yeoman of the Company David Bysouth who became a Liveryman in 2000 and an Honorary Liveryman in 2012. Believed to have been the first working wheelwright to become a Liveryman for many years. See a separate article of the History of the Bysouth Family under “Craft News.”

Copies of the book are available from:

The Clerk to The Worshipful Company of Wheelwrights at the address shown below.

Please make cheques payable to the Worshipful Company of Wheelwrights