As will be seen from the Affiliations page we have numerous links with the military and all stemming from 1670 when The Worshipful Company of Wheelwrights was granted its Royal Charter by King Charles II. One of the requirements of the Royal Charter was to provide wheelwrights for the Royal Regiment of Artillery (the Gunners) and baggage train whenever called upon.

As part of our continuing links we present a number of awards: 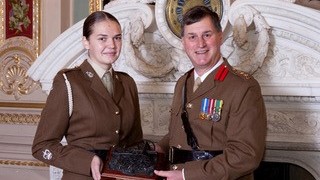 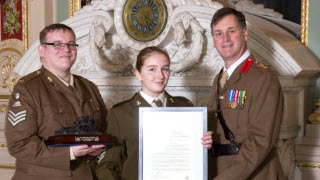 At the Installation Court meeting, Cadet Sgt Hannah Noonan from Greater London South East Sector Army Cadet Force was presented with the award for Cadet of the Year. 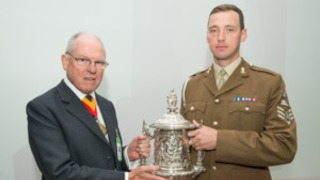 Presentation of the Openshaw Cup – October 2017

The Master Alan Culverhouse presented the Openshaw Cup to WO2 Jake Clapp.

We support 96, 97 and 109 (Cadet) Royal Artillery Detachments based at Erith, Grove Park and Woolwich. The Cadets invariably provide a very smart carpet guard at our Annual Banquet at the Mansion House and we are invited to the Cadets annual camp.

At Installation Dinner in December we present the Wheelwrights Royal Regiment of Artillery Cadet of the Year with a framed Citation, a bronze replica of a Nery Gun and a purse of £ 200.

The Nery Gun has a wonderful history for all three members of the Royal Horse Artillery who were manning such a gun in the Battle of Nery on 1st September 1914 received Victoria Crosses. The actual gun is preserved to this day in the Imperial War Museum.

The Gunnery Career Course is the pinnacle of a Gunner’s NCO career and to be chosen to be one of the 40 attendees to undertake the annual 11 month long course is an achievement in itself. Successful course attendees on the 10 modules and 12 theoretical assessments emerge as Sergeant Major Instructors in Gunnery.

The Master of The Worshipful Company is invited to attend the end of course Graduation ceremony and present the Openshaw Cup to the best student. In addition the winner is presented with an engraved Wheelwrights tankard.

The Openshaw Cup was initially presented to the Worshipful Company in 1918 by Colonel T H Openshaw CB, CMG, MS, FRCS to mark his unprecedented four years of Office as Master. The Cup is embossed and chased and depicts war scenes. It has a Britannia cover and handles, dated 1864 and with and an estimated value in excess of £ 25,000 in 2014.

In 1991 the Company decided to mark the long association with the Gunners by presenting the Cup to the Royal Regiment with the intention that it be competed for annually. It was agreed to present it to the most deserving Junior Leader at Bramcote. Unfortunately Bramcote was closed soon after and the Cup returned to the Wheelwrights. However after much discussion it was mutually agreed that it should be presented to the best overall student from within the branches of the Gunnery Career Course. The Cup resides in the Artillery Centre Warrant Officers’ Mess and Sergeants’ Mess in Royal School of Artillery, Larkhill.

The presentation of the Openshaw Cup and model of the Nery Gun is made to the best overall student attending the Gunnery Career Course, and the winner is invited to the Installation Court dinner.

The Regiment is part of the Army Reserve and has sub-units throughout the South of England. The Regiment’s role is Close Air Defence and is part of Joint Ground Based Air Defence and uses the Starstreak high velocity missile (HVM). Two Batteries are armoured and operate in support of manoeuvre forces and the other Battery is equipped with the lightweight LML version. The Regiment is paired with 12th Regiment Royal Artillery for training and exercises.

106 invite us to many events: we are invited to summer camp at the missile range at Benbecula, to join in with a day at Pirbright ranges and to attend the Sunset Ceremony at Grove Park when the Wheelwrights Trophy and engraved tankard are presented to the best NCO.

Each year the College runs two 49 week courses including 8 weeks holiday for those recruits within the age group of 16 years to 17 years 5 months and hoping to join Regiments and Corps including the Royal Artillery. The first step to becoming a Junior Soldier.

The Master is invited to Harrogate at the end of each course to present the Wheelwrights Cup to the best Junior Soldier who is posted to The Royal Artillery.