Yeoman Wheelwrights are working Wheelwrights who have been acknowledged by the Company to have a particular depth of expertise in the Craft.

The qualifications for a Yeoman are:

In each case the Wheelwright must still be in the Craft and wholly or in part earning his living from it and further, after being visited by assessors, has shown that the quality of their work is acceptable.

The contact details for Yeoman Wheelwrights can be found in the Directory of Working Wheelwrights.

On leaving school at 16 in 1989 Douglas went to work as an apprentice wheelwright with Liveryman David Bysouth at Three Cups, Heathfield, East Sussex. He completed a 4 Year apprenticeship through the Rural Development Commission based at Salisbury and attained a City and Guilds in Wheelwrighting. On David’s retirement in 1997 he became self employed and took over the business, renting the workshop and yard from him. At the same time took on Daniel Lambert-Gorwyn as full time employee and who had served his wheelwright apprenticeship with Douglas.

In 2007 David wished to sell the property but beyond the means of Douglas so he bought derelict farm buildings, on the proviso that he would pay the appropriate price when he obtained change of use planning permission. Achieved 2 years later and now his base of operations.

On the 10th February 2014 Douglas was sponsored by the Worshipful Company of Wheelwrights to be a “Master Wheelwright” under a Scheme promoted by the City and Guilds and Livery Companies Skills Council.

Having worked full time for Douglas for 17 years Daniel has now moved on and is self employed and works on projects intermittently on a piece work basis with Douglas. Douglas is looking to take on an apprentice. If interested please contact him.

Martin attended Rural Development Commission Wheelwrights Apprentice Scheme with “Tutor” being Liveryman Robert Hurford. Then worked for over 10 years at his own “shop”.

Now lives most of the year in Millicent, South Australia in semi retirement but since 2006 actively helping in the Millicent National Trust Museum, South Australia. Built in 1873 as a Primary School but became the Museum in 1960. Now houses 25 full restored buggies, carriages and wagons. Until 2006 the carriages were “in moth balls” in Port Adelaide..

Need some text about Mike.

In 1953 Mike began a 5 year apprenticeship to become a wheelwright with Hansfords of Honiton. He started his own business in 1963 with a large scale timber yard and wheelwright’s shop in Colyton Devon. Since then he has trained 4 people to become wheelwrights, including his son Greg. In 2005 Mike became a Royal Warrant Grantee as a Wheelwright and Coachbuilder to HM Queen and he is passionate about the trade as well as the maintenance of quality within it. He still works full time in the family business, regularly producing new vehicles, along with repairing and making all types of wooden wheels. His vast knowledge and experience makes him an invaluable member of the business and key to helping develop the Company’s apprentice Wheelwright.

He is shown here in 2016 receiving a Wheelwrights’ Master Certificate from the Lord Mayor of London, Lord Mountevans, in recognition of the excellence he has have brought to the wheelwrights’ craft for over 40 years. 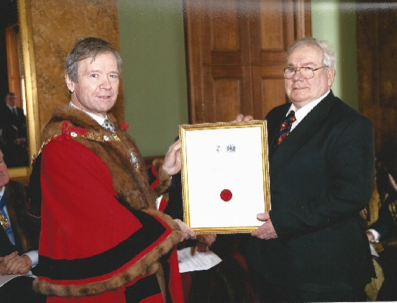 Need some text about Peter

Phillip Gregson has run his own wheelwright’s business for the last 10 years from his workshop in Southport. The craft runs in the family and he is a fourth generation working wheelwright. As part of his training Phillip attended Hereford College, where Liveryman Robert Hurford was his course tutor..

Besides building and repairing a whole variety of wheels he is very keen on demonstrating his craft and has done this at public events and shows all over the UK. Phillip has a strong interest in Heritage crafts and helping ensure that they continue to survive. He spoke on the subject of wheelwrighting at the Heritage Craft Association Spring conference that was held in March 2013 at the Victoria and Albert Museum in London.

Need some text about Philip Holder.

Nick started his career as a Wheelwright in 1975 at Croford Coachbuilders in Ashford, Kent where he served a 5 year apprenticeship covering woodwork, metalwork and welding. Since then he has worked on virtually every type of wooden wheel, including ‘tightening’ two wheels on the Lord Mayor of London’s State Coach in the 1990s, and fitting rubber tyres to the Queen’s Gold State Coach. Nick’s passion is the repair of veteran car wheels and a recent project has involved restoring the wheels from a 1910 Clement Bayard. He regularly repairs wheels of carriages from the Royal Mews.

He is shown here in 2016 receiving after receiving a Wheelwrights’ Master Certificate from the Lord Mayor of London, Lord Mountevans, in recognition of the excellence that he has have brought to the wheelwrights’ craft for over many years. 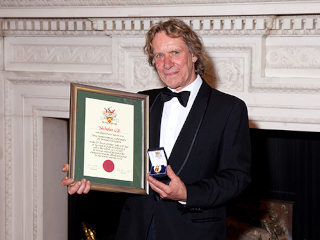